Such samples have long been a challenge with ordinary geotechnical sampling. 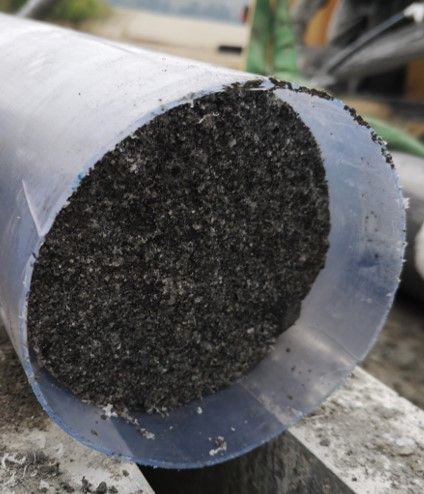 The photo shows a sample of poorly graded sand sampled with the Geofrost Coring method.

Geofrost Coring gets core samples from mixed soils containing more or less cobbles with fines in between. 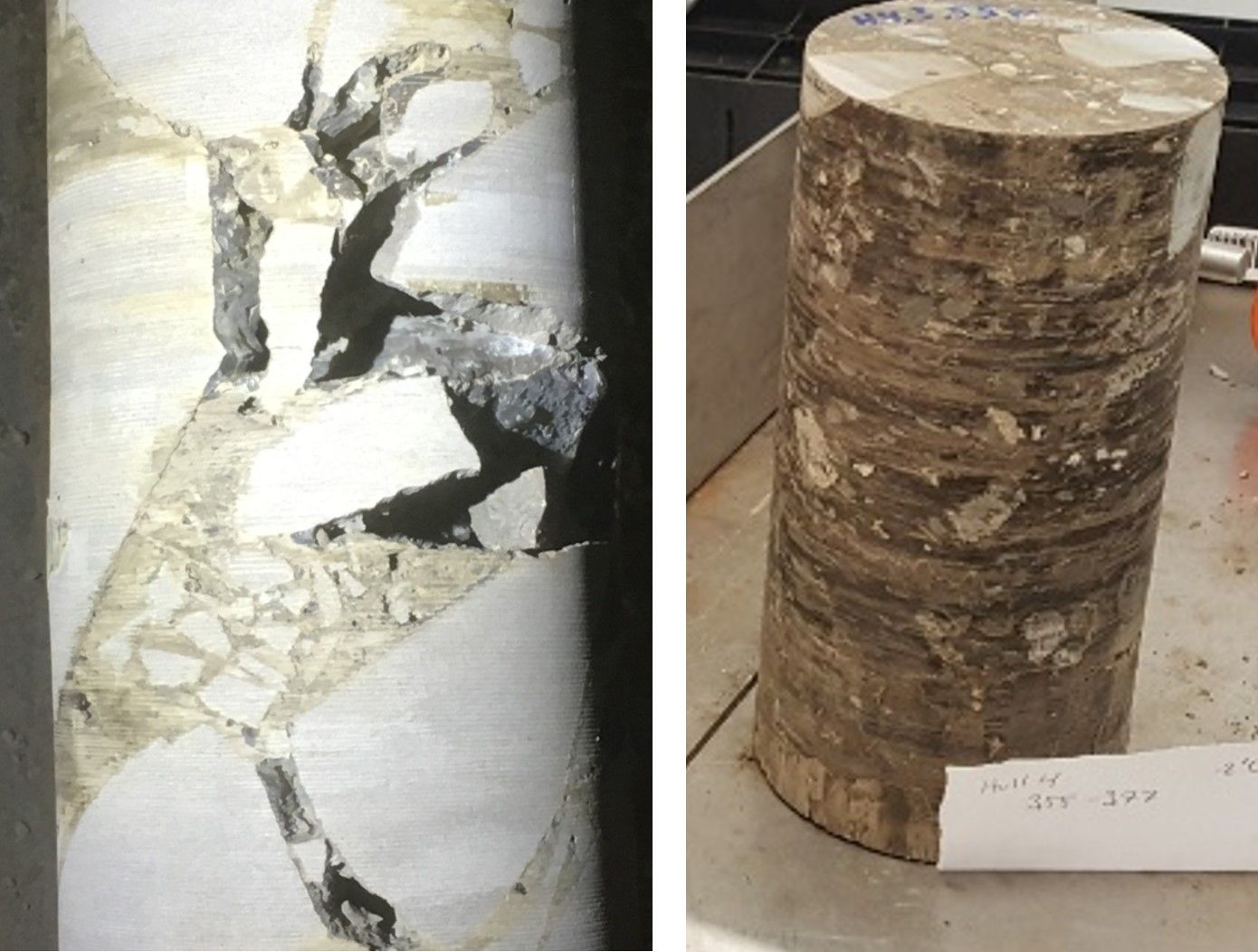 The photos show talus with cavities and moraine with gravel and cobbles, sampled with the Geofrost Coring method.

Geofrost Coring obtains undisturbed samples of fill, which often is mixed soils. As long as it is possible to drill it can be sampled. 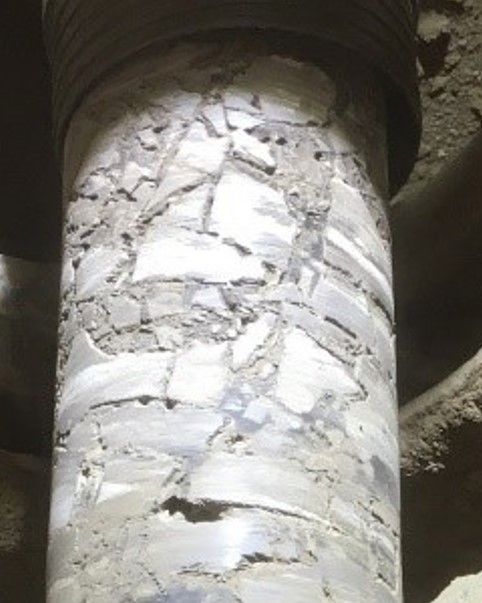 Geofrost Coring can penetrate stones and rock and at the same time capture the fines, enabling testing of undisturbed samples in the laboratory. This enables closer examination in laboratory of the transition zone between rock and soil and control of critical rock fill compaction. 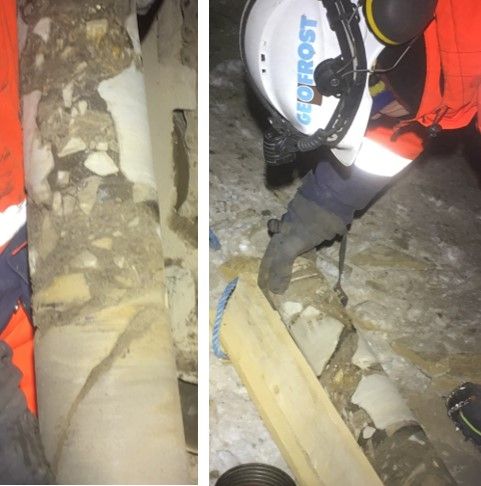 The photos show transition zone between soil and rock sampled with the Geofrost Coring method.

With Geofrost Coring fracture fillings are captured, even empty cavities and water filling.

With conventional core sampling it is often difficult to assess the filling material because it is often washed away. 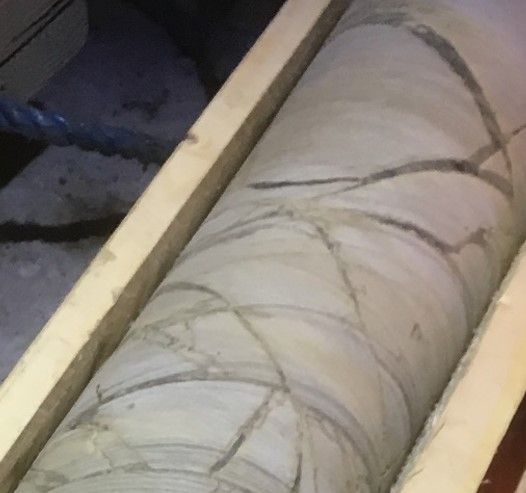 The sample on the photo, which is sampled with Geofrost Coring, shows fractured rock and that the fracture fillings are intact.

With Geofrost Coring all phases are locked in place in situ, making the samples showing exact position of any contamination. One wants to capture both the liquid and gas phase, in addition to contamination i solid phase. 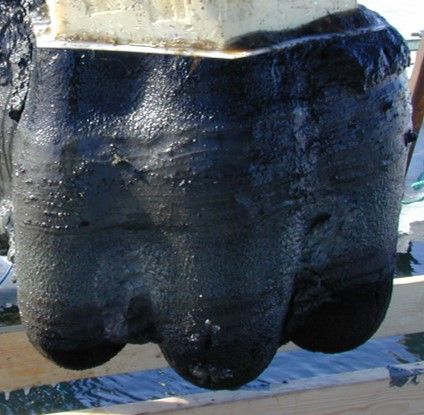 The photo shows contaminated sediment block from a lake.

Geofrost Coring can capture undisturbed samples of permafrost without thawing the surface and disturb the sample. When temperature is close to the melting point, as often is the case in marine permafrost sediments with pore water containing salt, it has been extremely difficult to get good quality samples.

In areas with seasonal frost, sampling through the layers containing ice lenses may add new knowledge to how winters with different temperature variations affect the buildup of icelenses. This can be documented by undisturbed sampling of ground with ice lens inclusions. 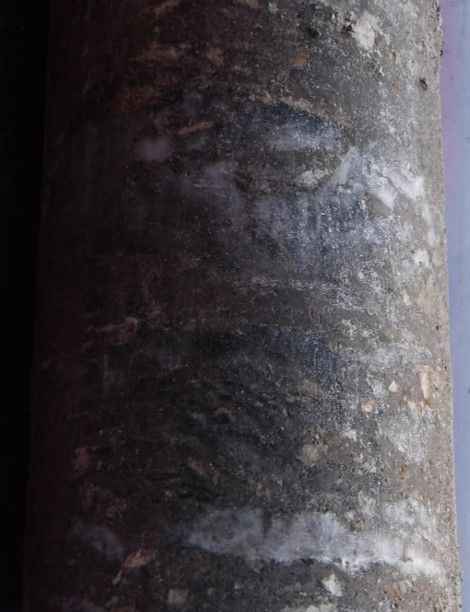 The photo clearly shows areas of ice in the permafrost sample cored with Geofrost Coring.

Geofrost Coring samples are frozen by ground freezing and may be tested directly to find in situ frozen strength parameters as well as thermal properties and avoids complicated preparatory build in and freezing procedures to recreate the conditions in the frozen ground.

Geofrost Coring enables performing laboratory testing of the material as it was in situ. The undisturbed frozen samples are robust and can easily be handled for preparation in the apparatus. Confining pressure like in situ is applied to the sample before it gets thawed. Then the desired test is run.

The sample has the actual structure and compaction, instead of being artificially built. This makes it possible to find strength and deformation properties for both frictional soils and mixed soils, as well as finding actual permeability properties through critical layers.

For Geofrost Coring samples it is possible to do a much better classification and description of the layers, specially for inhomogenous soils, compared to classification only from material received by drill cuttings or augering.

Porosity and density may be determined where earlier only qualified guessing took place.

Since the method freezes and incapsulates the ground, the properties are preserved without getting disturbed or damaged by the sampling. This provides far more reliable information about the ground than other alternatives such as drill cuttings analysis, probe drilling, CPT or disturbed sampling.

Accurate properties, such as strength, deformation and permeability, are found by thawing the samples in the test apparatus and applying the confining pressure, water pressure and temperature before the test is started. This way accurate data about density, water content, grain distribution, liquid and plasticity limits, salt content, contaminations and other parameters of interest are obtained. Water content is adjusted for due to having been frozen.

Visual inspection of the samples gives precise information about acutal layering in the ground.

Infrastructure projects have often great uncertainty about ground conditions in connection with rock fissure fillings, frictional soils, moraine, talus, fills and mixed soils in general and have missed a good method to get the required information.

Geofrost Coring provides the neccessary information so the owners can make informed decisions and reduce the risk during planning, design and execution.

We offer our services worldwide.

If you have questions or would like more information, please contact us. With project info, we quickly provide price estimates.