Ground freezing was required to get through a rock depression filled with permeable glaciofluvial material, with crown 120 m below sea level. Geofrost had the full responsibility for all the activities from design to procurement, construction, commissioning, and hand over of the frozen structure.

The freezing zone was in direct contact with 120 – 140 m static water pressure from the sea throug the permeable deposits. Figure: Geofrost

The longest tunnel on the Oslofjord Crossing is the 7.2 km long undersea crossing itself. The 78 m2 highway tunnel comprises three lanes - one lane going downhill and two lanes on the uphill slope – and has an inclination of 7 % to minimize tunnel length. It was the 19th subsea road tunnel to be built in Norway by The Norwegian Public Roads Administration (NPRA). SRG was the main contractor.

The Oslofjord is situated in a major regional rift belt, the Oslo grabend, in which the total vertical displacement is about 2 000 m. The bedrock consists of deep eruptive rocks and dykes of Permian age, dominated by coarse-grained granite, traditionally termed Drammens-granite. The rift belt crosses the Oslofjord tunnel.

The rift belt here consists of several faults and weakness zones, some of the major ones following the fjord over long distances. The seismic survey showed three wide channels in the threshold of the fjord, eroded by glaciations. In each of these channels, major weakness zones were confirmed. The "Hurum weakness zone" having the lowest seismic velocity of 2 600 m/s was further investigated, among other methods by two penetrating core holes. One of the holes was made by directional core drilling along the assumed tunnel alignment. The other core hole was made from the other side. Core material consisted of familiar crushed rock and clay. They both missed the depression filled with frictional soil.

The 15 m wide zone of loose glacifluvial deposits at the bottom of a deep channel above the "Hurum weakness zone", was found by probe drilling from the tunnel head. It is believed that the channel was cut by a glacial melting river, leaving behind a permeable soil deposit containing sand and gravel in addition to the larger rounded blocks of rock; a glacifluvial deposit. Without any fines the zone was highly permeable with constant hydrostatic water pressure of 12 bars at the crown. 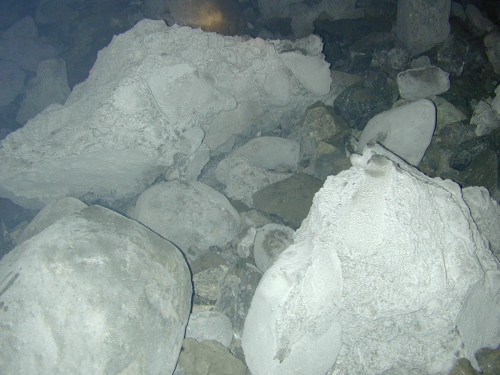 There were 3 headings: one from the east side of the fjord and one in each direction from a 730 m long adit at the sea front on the west side of the fjord. The full face of the tunnel was excavated by conventional drill and blast methods, with an average advance of 30 to 40 m a week at each tunnel face.

It was from the eastbound heading from the adit the glacial zone was first encountered by a probe hole. As a routine, three 30 m long probes were drilled in the crown, having a 15 m overlap. It was soon after the overlap with the previous probe, the new probe struck water at enormous pressure, and it was clear that the probe had intersected with the full hydrostatic pressure of the 120 m head of the fjord above. Further investigations of the area showed that almost half of the cross section would run into the loose glacifluvial soil. The lower half contained fractured rock of the crushing zone.

It was decided to excavate a lower bypass tunnel, spiraling away from the main tunnel alignment, passing some 20 m below the glacial channel, and rising up to the main tunnel alignment on the other side of the zone. From there the tunnel proceeded eastward under the fjord as well as backwards to the problem zone. The bypass tunnel later became the drainage sump, replacing the one originally designed.

Grouting was the preplanned solution for progressing through this zone. Continued drilling problems indicated that the soil zone would be difficult to stabilize by grouting. The attempts to inject grout and seal the zone had no effect. In fact, more than 700 tons of cement-based grout was pumped into the zone without the slightest effect in cutting off the water ingress or reducing the water pressure. Large volumes of grout/concrete would be needed and it would be difficult to control the result, if continued grouting were to be the final solution. It was therefore, after 5 months of grouting trial, decided that freezing was necessary to stabilize the zone before excavation. The decision was based primarily on the assumed higher and more controllable safety of the freezing method. The bypass tunnel had taken the problem zone out of critical time schedule.

Geofrost, as a subcontractor, was responsible for both design and execution of the artificial ground freezing works, including drilling. 46 m was left between the two tunnel faces. It included the approximately 15 m wide zone of permeable glacifluvial and morainic deposits at the bottom of the deep channel, and some good quality rock on each side.

Design of the frozen structure

Geofrost designed the frozen structure based on the Berggren creep model for frozen soil and design loads from GeoVita. Third party design verification was done by SINTEF.

Ordinary core drilling failed to give undisturbed samples suitable for laboratory testing, except for two small pieces. As a result, the frictional material flushing out of the drill holes were gathered, compacted and saturated with sea water before frozen and tested. All tests were performed at The Norwegian Institute of Technology (NTNU).

Due to the relatively low strength caused by the salinity of the porewater at normal ground freezing temperatures, it was decided that the design temperature should be as low as -28 °C. This temperature was both obtainable in the laboratory and could practically be achieved in the field. The cycle of drilling, blasting, excavate and produce the permanent lining of a section was planned to take one week.

Before excavation could start, three different requirements had to be fulfilled for the frozen structure: 1) The temperature of the main frozen structure should be -28 °C or lower. The length of each drill and blast round was then given as a function of the temperature and thickness of the frost structure. As an example, a thickness of 3 meters at -28 °C resulted in an allowed unsupported length of 2.7 m. 2) The soil part of the face should all be frozen to ensure safe working area and support of the stabilizing frozen structure. 3) The complete circumference around the tunnel should be impermeable to avoid water seepage through the invert and thereby thermal erosion of the frozen structure.

Drilling was extremely difficult. The soil consisted of very good quality boulders in a matrix of loose sand and gravel. Earlier grouting had no positive effect on permeability and hole stability. Drill rods and grouting equipment left in place from these works, as well as rock bolts, gave the drillers a hard time. Deviation measurements were carried out for all holes. Despite all the complications, only 12 of 115 holes were abandoned.

Coaxial freezing pipes were installed inside the casing to circulate brine which was cooled by an ammonia based freezing plant, placed in the tunnel.

To ensure the design requirements were fulfilled, both before starting and during excavation, Geofrost carried out a thorough temperature measurement program. 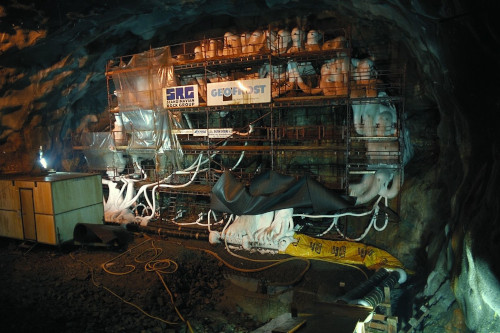 The full face of 130 m2 was excavated by means of short rounds of drill and blast and then the full concrete lining, before advancing to the next section. The excavation started from the opposite end of the installations. Because the freezing pipe pattern was coned, the thickness of the frozen structure decreased as tunneling proceeded. For this reason, excavation sections were planned to decrease from 3.0 to 1.5 m in length.

Excavation and lining were undertaken by the main contractor, SRG. The low temperature of the contour at approximately -30 °C was considered when designing drill pattern and loading of the holes. Detonating fuse was used in the two outermost rows. Igniter was electronic. Otherwise anolit was used for the rest of the face of 130 m2. There were no problems with drilling in the frozen material and work proceeded as planned, with good results.

At the most, 40 % of the face consisted of soil. The bottom layer was a morainic material, well rounded, containing all fractions up to boulders of 3 to 4 m3. Above there was a layered glaciofluvial material, and stones from most parts of southern Norway was recognized in the zone.

The vault and face were shotcreted, with layers up to 20 cm, to avoid stones falling from the surface when heat from the working machinery rises and thaw the surface. Additives in the shotcrete prevented any problems with shotcreting the very cold surface.

Concrete lining was 1.2 m in the bottom and 1.0 m in the vault. It was designed to take full water pressure. Strength requirements of the concrete in the lining before next blast, was 40 MPa. This was reached after approximately 20 hours as prescribed. 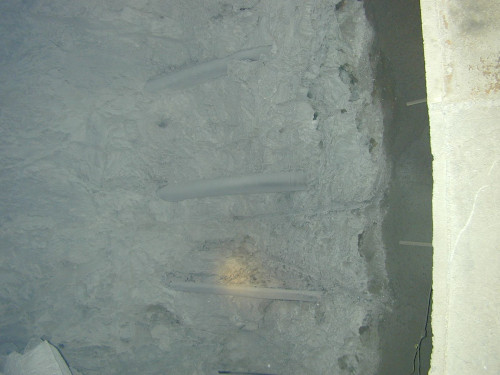 It was possible to plan, design and control all operations necessary for the project fulfilment. Drilling for the freezing pipes was the most challenging task. There were neither stability problems nor any water leakages. Shotcreting and concreting against the exceptionally cold ground surface worked very well without any problems. A very difficult situation was solved safely in a controlled manner.